Radioactive material used in medicine can be used for either diagnosis or therapy. In both cases the primary directive is to minimize patient dose to non-critical regions. This is best achieved using where possible isotopes with short half lives and fast metabolic or physical elimination. The second directive is to use material indistinguishable metabolically from the stable version.

First, a quick look at ionizing radiations and their properties. Any charged massive particle can ionize atoms directly by fundamental interaction through the Coulomb force if it carries sufficient kinetic energy. In living tissue, macromolecular damage can lead to dysfunction – enzymes won’t work if their structure is changed by ionization, for example.

Alpha particles are monoenergetic, massive but slow, stopped by thin paper or a few cm of air, giving up all their energy in a short range, 105 ion pairs mm-1

Beta electrons are emitted with a range of energies, just shy of 2000x lighter than alphas, but 100 x less ionizing ability. Useful for imaging because the particles are penetrating enough to escape from the body and be externally detected. Stopped by thin Al or a few cm/1m of tissue, 103 ion pairs mm-1

An exponential law of intensity v absorber thickness (x) c.f, law of radioactive decay shows how the intensity decreases with absorber thickness.If the absorber is homogeneous, we can define its absorptive ability by the ‘linear absorption coefficient’ ‘mu’, analogous to decay constant. The larger the value of ‘mu’ the better absorber of radiation the material is. ‘mu’ is related, obviously, to the density of the material but multiplied by a quantity describing how much of a target its atoms present to incoming radiation. We can keep it simple, however and just say:

Attenuation or the ability of a material to absorb therefore weaken the radiation, is an exponential function, as shown. We can think about attenuation as ‘partial absorption’.

The HVT or ‘half value thickness’ is therefore the value of thickness x such that I drops to I/2, or

HVT is energy dependent, as one might expect – see fig I2.2, but this is less important than the exponential principle. What’s the HVT of this material? In what units is it measured? Suppose you had an energetic beta source, a detector and several identically thin squares of Al. You might think how you’d measure HVT for Al. Do you see why the source/detector distance would have to be constant throughout?

You should be able to find the HVT for this material hence its attenuation coefficient.

Look at Qs 3 and 4 on p702. These are important – exactly the kind of thing they might ask, so go through them carefully.

Because I’m old, I can only hear up to 10kHz. Normal people hear from 20Hz-20kHz and the upper frequencies decrease with age because of decreased flexibility in the aural mechanisms, thickening eardrum, ossicle degradation and so on. A few minutes spent with p697 on ‘hearing defects’ might be valuable here followed by q9, p699.

The ear’s sensitivity is frequency-dependent and our previous value for 1pW per square metre is only true for a frequency of 1kHz – the most sensitive region being as we can see from the graph below is at about 3kHz. If the ear canal is about 3cm in length or a quarter of a wavelength, what frequency does this correspond to? (2.83kHz) Many other mammals have different ranges dependent on the configuration of the outer ear, the way the pinna collects the sound and their electrical responsiveness.

Pitch is what we usually mean by perceived frequency, but a better way to think about it is it’s related to both pitch and intensity. A soft sound at a particular frequency is perceived as being of lower pitch than the same frequency but louder or more intense.

The sound is converted to an electrical signal by this (grossly simplified) mechanism. The sound wave interacts with hairs of different lengths like a Barton’s pendulum with a hair cell somewhere along the Organ of Corti and receptors on the Basilar Membrane which decreases in stiffness along its length. A particular frequency causes one of the hairs to oscillate with large amplitude or resonate and hence send its electrical signal to correspond to this frequency. The longest hairs are furthest away from the oval window hence respond to lowest frequencies.

To prevent permanent hearing damage, it’s a bad idea to stand close to the speakers at a rock concert.

This looks about far enough away…

You’ve all seen inverse square rules like this before, here the sound Intensity I in watts per square metre a distance r away from a sound of P watts is shown. Intensity is simply a measure of how much energy falls per second on a 1 metre square of surface.

Curiously, the increase in hearing sensation is proportional to the fractional increase in intensity and the ear’s response to intensity is logarithmic which can be exploited to define a scale of hearing based on the ‘bel’ or more usually, the ‘decibel’ where 10dB = 1B.

An increase of 10dB implies an increase in intensity by a factor of 10, similar to the Richter scale for measuring earthquake damage.

We can think of

We’re comparing the sound we’re listening to to the lowest perceptible intensity we can perceive with perfect hearing.

This is used in all comparative dB calculations – the threshold of hearing, which increases markedly with age. Libraries, even so-called ‘silent spaces’, are probably generating an intensity of 40dB and those close to the Stones’ concert speakers will in all probability be in pain and risking permanent damage at between 120 and 130dB.

Look at Q2 and 3 on page 694. This shows how to convert a sound intensity into dB. Q4 on page 695 reminds us that sound intensities must be added, not dB values. Try Q1-5 on page 698. Check with me if you have a problem.

Acoustic impedance (Z) indicates how much sound pressure is generated by the vibration of molecules of a particular acoustic medium at a given frequency. This frequency (f) dependence is useful when describing the behaviour of musical wind instruments. Mathematically, it is the sound pressure p divided by the particle velocity c and the surface area S, through which an acoustic wave of frequency f propagates. This is a longwinded way of saying that the specific acoustic impedances must match for maximum transmission. If they don’t, there’s too much reflection and not enough transmission. This is one reason why during prenatal ultrasound scans, a gel is placed on the transceiver to provide good acoustic coupling as well as lubrication. Here’s the formula 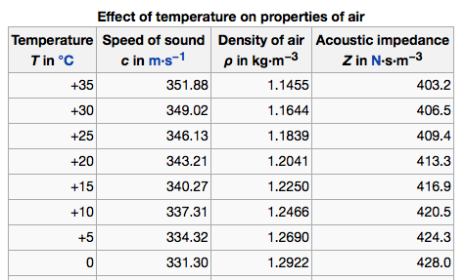 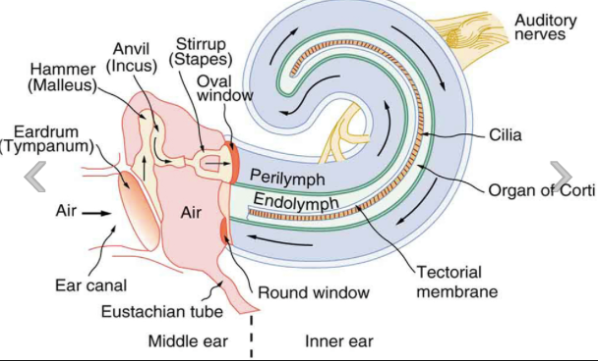 The ear consists of three basic parts – the outer ear, the middle ear, and the inner ear. Each part serves a specific purpose in the task of detecting and interpreting sound. The outer ear collects and channels sound -a  longitudinal pressure wave- to the middle ear. Because of the length of the ear canal, it behaves like a resonance pipe open at one end, with antinode at the open end and node at the eardrum. It is capable of amplifying sounds with frequencies of approximately 3000 Hz – you should be able to verify this using an ear canal length of a few cm = a quarter wavelength, and wave speed about 340m/s. The eardrum is a flexible membrane like a drum skin, oscillating at the same frequency as the incoming sound. The 3 middle ear bones or ossicles are inside a fluid filled cavity and are levers, amplifying the pressure wave. The ossicles mechanically convert the vibrations of the eardrum into amplified pressure waves in the fluid of the  cochlea or inner ear with a lever arm factor of 1.3. Since the area of the eardrum is about 17 times larger than that of the exit point, the oval window, the sound pressure is concentrated, leading to a pressure gain of at least 22. This enhances the ability to hear very faint sounds where the incoming force on the eardrum is very small. Study the worked example on p692.

The pressure wave at the oval window is then transformed into a compression wave through the fluid in the inner ear which converts this energy into nerve impulses transmitted to the brain.

The Pages sidebar is now on the left behind a slider and the keyword search is at the end of the first batch of posts.

for galaxies is based on their appearance.

Our Galaxy, the Milky Way is part of the Local Group (LG) extending for 10m ly containing about 20 galaxies, the nearest being the Large Magellanic Cloud at 2m ly

Beyond this – a supercluster ( diameter = 15Mpc) of which our LG is a member.

How far away? We calculate from Doppler shift measurements on known spectral lines (either H or He, usually)

as long as we realise that the velocity as calculated is as if the star is moving directly away from us.

distance d and recession speed v are proportional in an isotropic universe, but there is controversy over its exact value. Notice the bubble in the middle of the (much simplified) graph.

The Particle data Group offer the best estimate of the Hubble constant (“per second”) at 72 km s-1 Mpc-1  by observing Type 1 supernovae whose distances are known to better than 5%. It implies that at some point in time the Universe was a point – indirectly implying a Big Bang at r=0.

Thus,  1/H approximates to the age of the Universe, currently thought to be 13.7 bn years. You might like to fiddle with the units to check this value.